of Hanan Haber, The Federmann School of Public Policy, T. H. U. J. (2015). The European Union as a Social Actor? An Analysis of Social Protection in the EU’s Electricity Sector. 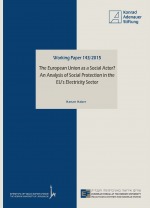 Social regulation at the EU level is on the increase at least when it comes to the electricity sector and following the gradual liberalization of the sector. This paper asks how and for what reasons social protection of vulnerable consumers has been introduced into the process, focusing on the period between the second and third directives on electricity sector liberalization (2005-2009). In this period these protections grew substantially, gaining a more binding and a more transnational nature, a process led by the Commission and the European Parliament. This development runs counter to our understanding of the electricity sector reform in the EU as focused primarily on the creation of open competitive markets. The paper argues that the introduction of protection of vulnerable consumers in the electricity sector reform facilitates (rather than hinders) the process of economic reform, by adding political and democratic legitimacy to the liberalization process. It asserts that adding social protection to economic reform in this case is instructive regarding the development of the EU as a regulatory state and the regulatory state more generally. Economic reform and economic regulation create the conditions for, and require, more social protection and social regulation. Separating the social and economic spheres may seem like an economically efficient strategy, but may ultimately have the opposite effect.