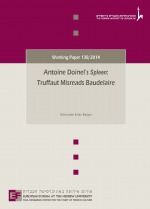 This essay examines the intertextual dialogue between François Truffaut’s cycle of autobiographical films, known as the Doinel cycle, and Charles Baudelaire’s collection of poems The Flowers of Evil (Les Fleurs du mal), and collection of prose poems The Spleen of Paris (Le Spleen de Paris: Petits poèmes en prose). The focal point is the fourth Doinel film, Bed and Board (Domicile Conjugal, 1970), and the poem “Spleen IV” in The Flowers of Evil. By applying Aner Preminger’s (Preminger: 2006) cinematic adaptation of Harold Bloom’s “anxiety of influence” theory (Bloom: 1973) and “misreading” concept (Bloom: 1975), I argue that the explicit and implicit references to Baudelaire are not a homage, i.e. a mere expression of admiration, but a complex and multilayered misreading, which encompasses the dual movement of admiration, as well as rebellion, towards the forefather. The wrestle with Baudelaire is a significant milestone in Truffaut’s journey towards finding his own voice on the one hand, and towards establishing his position as an important (re)former of modernist cinema on the other. Furthermore, along with a considerable contribution to thematic interpretation of Truffaut’s film(s), the misreading of Baudelaire is distinctly important as it reveals that Truffaut’s cinema is rooted in poetry, as, and perhaps even more than, it is rooted in prose fiction. On a larger scale, this suggests that the cinematic medium corresponds to the hybrid genre of prose poetry