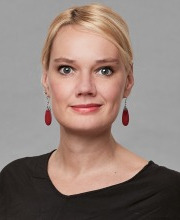 Dr Ina Kubbe is a Post-Doctoral Fellow working at the School of Political Science, Government and International Relations at Tel Aviv University, where she mainly researches and teaches on corruption, migration, gender politics and conflict resolution.

Ina also works as an international consultant for several organizations and institutions such as the European Union, United Nations Office on Drugs and Crime, Organization for Security and Co-operation in Europe (OSCE) or NATO. Ina has already published several books, special issues and articles in the field, such as on “Corruption and Norms: Why Informal Rules Matter” (Palgrave), “Corruption and the Impact of Democracy” or “The Role of Law in Curbing Corruption” (Crime, Law and Social Change).

She just published a new book on “Corruption and Informal Practices in the Middle East and North Africa” (Routledge). She is specialized in social science methodology and comparative research on empirical corruption, democracy and governance research as well as political psychology - with a special focus on Europe and the Middle East. Ina had several academic stays abroad such as in the USA, Sweden, Italy or Russia.

You can also visit her webpage at: https://www.inakubbe.com/